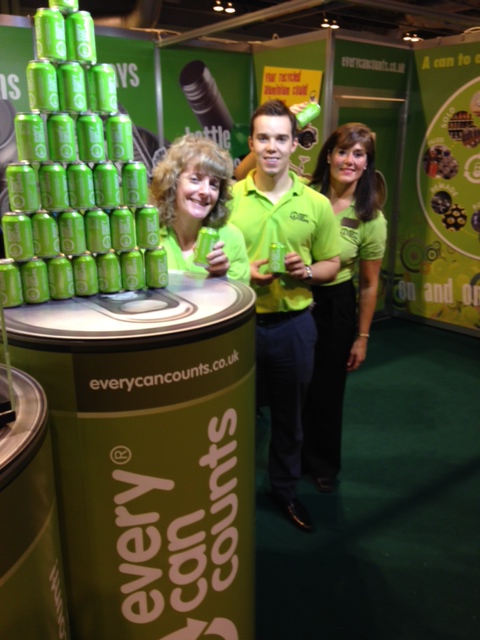 At first you wouldn’t think it appropriate for a packaging recycling organisation to exhibit at a food show, it’s more appropriate surely that these are the preserves of artisan food producers and Michelin-starred chefs?   But there can be few better opportunities to showcase the versatility and recyclability of aluminium packaging to an engaged audience than the annual BBC Good Food Show, so that’s where the Alupro team spent in the last weekend of November.

The majority of aluminium packaging is found in the kitchen – as cans, dairy lidding, foil wrappers and food trays and even the screw tops on wine bottles – so when people are thinking about eating and drinking over the festive season what better time to remind them about what and how to recycle afterwards?

It was our second year attending the winter show, the largest in the popular exhibition series based around popular BBC food programmes including Masterchef, Saturday Kitchen and the Great British Bake Off. Over the five days of the show over 80,000 visitors filled the NEC – and it felt like most of them stopped by at the Alupro stand to talk to us about aluminium packaging recycling.

Thanks to the support of some of our members and our Every Can Counts funding partners we were able entice people onto our stand by offering refreshments including mince pies in foil cases and refreshing cans of raspberryade in recyclable aluminium cans.  It was a great conversation starter!  Associate members Wrap Film provided packs of Baco foil which we gave as spot prizes.  Needless to say we had a couple of Every Can Counts can crushers on hand to make sure people could recycle as soon as their can was empty.  We also provided cans and crushers for the press office and the VIP lounge.

It gave us a real buzz to see people walking around the show sipping from their bright green ‘Every Can Counts’ cans, and to hear about children pestering their parents to bring back their cans so they could crush and recycle them.  A great way to remind and reinforce the recycling message.

So, over 10,500 cans and 600 mince pies later the Alupro team headed home on Sunday tired and with sore feet but encouraged that this festive season the recycling message has got directly into the homes of Good Food Show visitors and they’ll put their empty cans, clean foil and used up aerosols in the recycling box with confidence!