­­­­­­­­­­­­Alupro’s ‘Leave Your Cap On’ campaign, which encourages residents to recycle aluminium screw tops along with the glass bottles on which they came, has recently launched in four local authorities.  The latest campaigns, in Oxford and Berkshire, mean the number of bottle banks across the UK now promoting the recycling message has reached 5,443, taking the number of households reached by the message past 2 million. 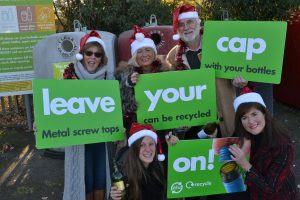 Project managed by the Aluminium Packaging Recycling Organisation (Alupro), the new campaigns have been launched by re3 – the waste management partnership of Bracknell Forest, Reading and Wokingham Borough Councils and FCC Environment; and Oxford City Council.

New eye-catching stickers can now be seen on all 597 bottle bank sites in the re3 area explaining why simply screwing the lid back on your glass bottles can help recycle more, and benefit the environment.

The Oxford City Council campaign is being publicised through the council’s website and social media as well as with eye-catching stickers on 46 bottle banks in the city. Phil the bin, the City’s blue bin recycling league mascot is helping to promote this campaign.

Rick Hindley, Executive Director of Alupro said: “With Christmas and New Year fast-approaching it’s the ideal time for people to get into the habit of screwing caps back on and helping to boost recycling figures. The market for aluminium bottle closures is growing rapidly, particularly for wine bottles, so it is important that people are made aware of how simple it is to recycle them.  Alupro has free resources available to local authorities to encourage this simple but effective behaviour change, including artwork templates and short videos to explain how simply screwing the top back on the empty bottle helps recover this valuable, sustainable and recyclable material.”

The ‘Leave Your Cap On’ campaign is part-funded by British Glass and Scottish-based manufacturer, and Alupro member, Guala Closures. Launched in 2013, campaigns are now running in 15 local authorities and waste partnerships.

Alupro is recruiting!
Scroll to top