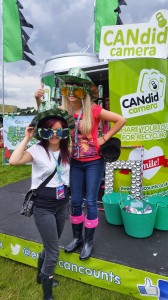 Industry-funded drinks can recycling programme Every Can Counts went on the road to get its message about the importance of recycling drinks cans when out of the home to an estimated target audience of 5 million music lovers and holiday-makers over the peak summer holiday consumption period.

For the second year, additional investment from programme funding partner Carlsberg UK enabled Every Can Counts to create interactive can recycling zones at Latitude, Reading and Leeds festivals. Festival-goers were encouraged to exchange their empty drinks cans for rewards, including t-shirts and a chance to win tickets for next year’s festival. Carlsberg UK staff were also recruited to help at each festival as part of the company’s ‘Engaged with Society’ corporate social responsibility programme.

The Every Can Counts festival zones included a ‘Candid Camera’ photo booth, which took souvenir pictures of festival goers and featured fun props made out of drinks cans. The live photo feed from the booth was posted on social networks, and saw over 700,000 social media users engage with the programme during the summer, upping the brand’s young target audience online. A video case study of the partnership project can be viewed here

Matt Winterburn, Head of CSR at Carlsberg UK, commented on the partnership: “To some people recycling is what the older, responsible generation do, but for Carlsberg UK, it is an exciting message that we believe can shape younger drinkers’ attitudes for years to come. Based on the interaction we had with festival-goers, we’re confident that the festival recycling programme will go from strength to strength and have a tangible positive impact on consumer behaviour.”

The programme also attended V Festival at Chelmsford and Stafford, continuing a relationship that began in 2010. In addition Every Can Counts worked with local authorities at popular seaside destinations in North Devon and Dorset to raise awareness of the ‘recycle on the go’ message through the summer.

Recycling made easy on the beach at Bournemouth

Every Can Counts provided new bright green can shaped bins at Bournemouth’s seven mile beach, to encourage its 4.5 million yearly visitors to recycle their drinks cans. Promotional support was also provided to beaches in North Devon and Poole, where Every Can Counts can crushers have been in place for the past three summers.

Rick Hindley of Every Can Counts, said: “Summer-time is an ideal opportunity to talk to people about recycling drinks cans ‘on the go’ and we’re very pleased with the results of this year’s campaign activity. This kind of activity enables us to engage in particular with a younger audience, and thanks to the increasing profile of Every Can Counts on social media, we have an engaging way to keep in touch with them over the coming months and encourage them to keep recycling at home, at work or college and when out and about –wherever they are!.

“Recycling on the go is just one focus of the programme, and we will continue to target all cans consumed outside the home. By helping organisations with practical advice and supporting resources, including branded collection containers and free promotional materials, we can help encourage staff and visitors to recycle more, wherever they are and whatever they are doing.”