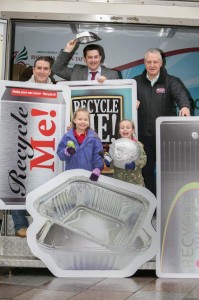 The new campaign, which is backed by Waste Awareness Wales and the metal packaging industry, aims to help people in the two boroughs understand what can be recycled and explain what happens to the metals collected. The campaign is also supported by Minister for Natural Rssources for the Welsh Government, Carl Sargeant.

With the average household in the Torfaen Borough using over 60 million items of metal packaging* each year and the RCT Borough using 106 million items (joint total 166 million), the campaign is encouraging residents to recycle more of the food tins, drink cans, foil trays and empty aerosols. The metal used to make each item is endlessly recyclable, saving natural resources, energy and greenhouse gas emissions and cutting pressure on landfill for waste disposal.

Leaflets explaining how and what items can be recycled to boost the area’s metal packaging recycling rates have  started arriving in every home across the two Boroughs. In addition the ‘make your metals matter’ campaign message will feature in advertisements in local newspapers and radio, as well as online via the councils’ websites. 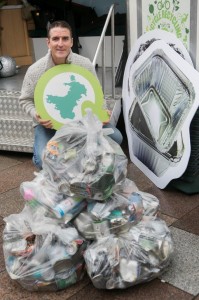 Williams said: “As a nature lover I’m passionate about caring for the environment, and getting in the recycling habit at home is one way we can all help to make a difference. Just think of all the things we use in our kitchens and bathrooms that are packaged using metal – food tins, drink cans, foil trays and aerosols – these items can all be easily recycled over and over again! I think this is a great campaign and I’m delighted to be supporting it today.”

Andrew Osborne, Campaigns & Recycling Officer, Waste Awareness Wales, supported the call to action saying: “We’re asking residents to get in the habit of recycling metal packaging that they use every day in the home. A small action like simply putting your drinks can or food tin in the recycling bin or bag will make a big difference to the environment as well as helping Wales meet its recycling targets.”

The Minister for Natural Resources, Carl Sargeant at Welsh Government said: “Wales is leading the way for recycling in the UK, but we have challenging targets to meet and it’s great to see that Torfaen and Rhondda Cynon Taf councils are working with residents and the metal packaging industry to make improvements. It is vital that we try and make metals matter and recycle as much as possible.”

Rick Hindley of the MetalMatters industry partnership said: “We have done extensive research into recycling habits and found that it is often the uncertainty of how to recycle, and what happens to the items recycled that prevents people from doing more. Campaigns like this allow us to take the recycling message into people’s homes and highlight exactly how they can help just by recycling more of the packaging they use every day.”

The campaigns in RCT and Torfaen are being jointly funded by MetalMatters, an industry partnership comprising the UK’s leading producers, users and recyclers of metal packaging and Waste Awareness Wales (part of the Welsh Local Government Association), and it is supported by the Waste & Resources Action Programme (WRAP). MetalMatters is run by the Aluminium Packaging Recycling Organisation (Alupro) on behalf of its funding partners.

Pictures show Iolo Williams at the launch of MetalMatters in Pontypridd, joined by L-R: Back Ian Helme of Coppice Alupack and Garvin Freeman of Tata Steel – both are funding partners of the MetalMatters programme. Front: Eleri Jackson, 8 and Evie Potter, 8 both from Ysgol Bryn Onnen School in Pontypool