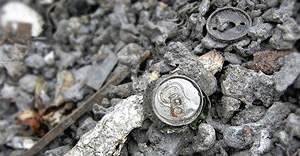 Following approval from Defra and the Environment Agencies, revisions are being introduced to the protocol which accounts for aluminium packaging recovered from incinerator bottom ash (IBA).

Three revisions to the protocol are designed to obtain a more accurate rate of the aluminium packaging currently being recycled in the UK or exported for recycling.

Ongoing analysis of IBA has led to this adjustment, which recognises that significant volumes of mixed non-ferrous metals are sold by IBA processors to UK metal reprocessors who separate the aluminium fraction for export or sale to a UK re-melter.

Exporters or UK recyclers of aluminium recovered from IBA mixed non-ferrous metals will be able to issue PRNs/PERNs based on 87.5% of the total recovered aluminium fraction.

In these situations metal processors are permitted to issue the PERN on the incoming weight to the fragmentation plant based on 70% (based on revised protocol figure above) of the IBA derived mixed non-ferrous metals.

These three revisions can be applied retrospectively from 1 January 2015 or the date at which the reprocessor/exporter originally applied for their accreditation if after the 1 January 2015, in line with the other changes announced by Defra last week.

The tonnage reported for aluminium packaging recovered from IBA is significantly below the level we know has been recycled or exported. Revisions to the aluminium protocols are part of Alupro’s on-going strategy to ensure recycling performance data is robust and that accurately reflects the industry’s efforts to meet national recycling targets.

Defra recently issued a statement urging producers and compliance schemes to comply with their packaging recycling and recovery obligations. Unaccredited reprocessors and exporters are encouraged to become accredited and compliance schemes called upon to actively assist them in this process to help secure the requisite number of PRNs/PERNs for their producer members.

Every Can Counts and KA ‘KAnival Krush’ take Notting Hill Carnival by s...
Scroll to top