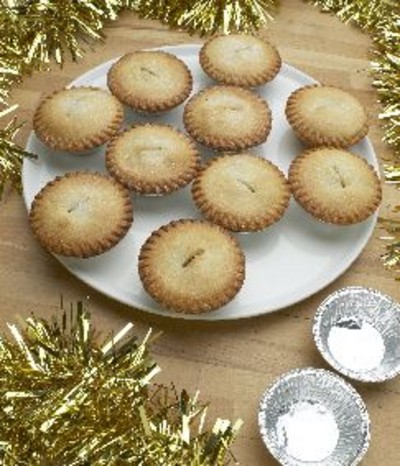 As sales of mince pies soar in the run up to Christmas, the Aluminium Packaging Recycling Organisation (Alupro) is urging consumers to recycle all their used foil and metal containers.

Eleven large recycling banks, recently installed throughout Broxtowe, Mansfield and Ashfield by recycling company Recresco in partnership with Alupro, mean residents in three local authorities in the East Midlands can now easily and conveniently recycle all used foil trays. Clean used foil sheet, metal food and drink cans can also be recycled. Introduced as part of a six month trial, the blue recycling banks will remain in place throughout the festive period and into the new year.

Ruth Meeke, programme manager at Alupro, said: “These new recycling banks offer a convenient way for residents to recycle the extra foil trays that are used over Christmas as well as metal packaging from other every day items such as drinks and food cans.”

Alupro estimates sales of metal drinks cans increase by at least 20% over Christmas, while more than 850 million foil trays for mince pies alone will be used over the festive period. This equates to around 680 tonnes of aluminium foil.

Ruth Meeke added: “Recycling one tonne of aluminium saves 9 tonnes of carbon equivalent gases. If all of the additional foil trays produced over the festive period are recycled, the saving in carbon equivalent gasses would be equal to taking 3,400 cars off the road for one year.*

“With the recycling banks now in place, there is a real opportunity for residents to recycle this valuable metal; it’s so easy to do, so why not make this Christmas a green Christmas?”

The six month trial will finish in February 2012 but if successful, the recycling banks will remain in place. Aluminium and other metal used in food packaging is an extremely valuable resource; it can be recycled indefinitely without any loss in quality and uses a fraction of the energy it takes to produce from raw materials.

Ruth Meeke added: “This trial offers residents the chance to make a real difference this Christmas and if successful, will see the recycling banks remain in place permanently.”

* Based on an average mileage of 12,500km/year and the average emissions of new cars according to the Society of Motor Manufacturers and Traders (SMMT) 2010 annual New Car CO

Alupro comments on the first year results for Courtauld 2