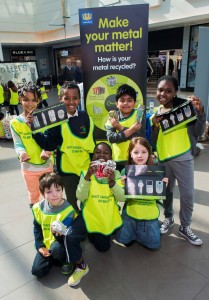 The Secretary of State for Environment, Food & Rural Affairs Rt. Hon Owen Paterson MP has offered his support to the MetalMatters recycling communications programme as three major campaigns have launched in the last month,  between them targeting 360,000 households.

The industry-funded campaign works with local authorities to help improve capture rates for metals collected at the kerbside, with communications designed to encourage people to make their ‘metals matter’.

MetalMatters campaign partnerships with the London Borough of Lewisham, Shropshire Council and Glasgow City Council all launched in March, with the aim of increasing recycling capture rates for metal packaging, and in turn offering lasting return on investment for the local authorities involved. 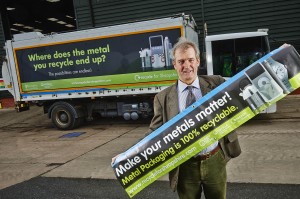 The programme has received praise from Mr Paterson, the Secretary of State for Environment, Food and Rural Affairs and MP for North Shropshire, who was on hand to launch Shropshire Council’s MetalMatters campaign and offer his support for the programme as a whole. He said: “This is an excellent campaign to encourage households to recycle their metal packaging and one I’m keen to support. I’m looking forward to seeing some positive results from the people reached by all three of these campaigns.”

Each of the recently launched campaigns will see leaflet drops to households and targeted marketing communications activities to promote the ‘make your metals matter’ message, including panels on recycling vehicles, outdoor advertising and town centre roadshows.1 In addition, MetalMatters provides the councils with a range of template communications materials for use in publications and on websites to promote the benefits of metal recycling.

The MetalMatters programme is funded by a partnership of metal packaging manufacturers, fillers and reprocessors and is delivered on their behalf by the Aluminium Packaging Recycling Organisation (Alupro), working in partnership with local authorities and their waste collection partners.

Rick Hindley, Executive Director at Alupro, said: “Our local authority partners are continuing to experience positive results in increasing their recycling rates and reducing waste sent to landfill. The benefits of introducing the MetalMatters campaign don’t just stop at the increase in metal capture rates, but also allow local authorities to recover the campaign investment costs whilst also generating additional revenue streams that can be ploughed back into the communities they serve.

“To receive backing from The Secretary of State is a fantastic achievement for the campaign and is a true testament of the impact that MetalMatters continues to have on increasing the capture rate for metal packaging in kerbside recycling schemes, for those implementing the programme.”