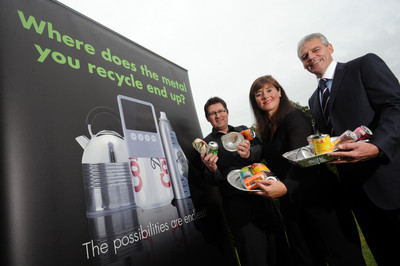 MetalMatters, the metal packaging industry-led programme designed to increase the capture rate for metal packaging collected at the kerbside, has launched its most ambitious campaign to date, in partnership with Kent Waste Partnership.

The latest campaign sees the marketing communications campaign roll out across 12 local authorities in Kent.  It will run until early December and will include two direct mail drops to each of the 630,000 households in the county.

Since its pilot in 2010 MetalMatters has been closely followed by policy makers, and featured in the Government’s Review of Waste Policy in 2011 as an example of Best Practice.  Now recently-appointed Minister for Resources, Local Environment and Environmental Science Lord de Mauley has also given the programme his support.

Commenting on the launch Lord de Mauley said: “MetalMatters is a great example of how industry and local authorities can work together to engage local communities, drive up recycling rates and also support further development of our waste management and recycling sectors.  The programme in Kent is on a very ambitious scale and we will follow this campaign with interest to see what it achieves.”

The Kent campaign includes leaflets, which will be sent to every home in all 12 districts, supported by locally-targeted advertising and awareness-raising events. Recycling vehicles and buses will carry the ‘make your metals matter’ message.  The eight week campaign, which is managed by Alupro, is being jointly funded by an industry partnership comprising the UK’s leading producers, users and recyclers of metal packaging and Kent Waste Partnership.

Cllr Paul Barrington-King, Chairman of Kent Waste Partnership (KWP) said: “The partnership between the KWP and MetalMatters demonstrates the clear desire for Kent’s councils to work strategically and practically on improving the capture of valuable recyclates.  The support of the Minister for the programme validates our supply chain approach is very much the way to go. It continues to place the KWP at the vanguard of supply chain thinking and activities”

Rick Hindley, Executive Director of Alupro added: “2012 has been an exciting year for MetalMatters, and we are delighted to have the opportunity to run the programme on such a grand scale in Kent. We are looking forward to seeing how the campaign develops and the impact it has on household metal packaging and attitudes to recycling.”

There have been five MetalMatters campaigns during 2012 covering 27 local authorities and reaching 1.5 million households.

Aluminium on course to hit Targets
Scroll to top