Warwick District Council has increased kerbside recycling of metal packaging by 28 per cent in just six months – through MetalMatters, the industry-funded communications campaign.

Launched in October 2015 the Warwick MetalMatters campaign directly targeted all 53,000 households in the district with a two phase leaflet drop and additional advertising on recycling vehicles, council information points and at a local cinema. The campaign cost 29p per household and was funded by the MetalMatters industry partnership and SUEZ recycling and recovery UK, who hold the collection contract with Warwick District Council. Additional revenue generated from the increase in metals capture and landfill tax savings meant campaign costs were recouped within six months.

Steve Holgate, Director of Municipal Services at SUEZ said: “The results of MetalMatters in Warwick have been outstanding. We invested to improve the metal capture and recycling rate and we’ve not only seen an increase in the aluminium and the cans but we’ve seen an increase in all recyclable materials across the board. And we’ve had payback in just over six months. It’s definitely been a worthwhile investment and one we are looking to repeat for other contracts we operate in the UK.”

Recycling Development Officer at Warwick District Council, Becky Davies said: “We’ve been in the same position as a lot of local authorities, where we no longer have a budget for recycling promotions and no longer have a dedicated recycling team. This means our recycling levels have been static for a number of years. The MetalMatters campaign has been a big success and has helped to increase the amount of metal recycling captured by 28 per cent and all dry recyclables by 3%.” 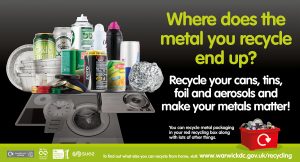 MetalMatters is a proven communications programme designed to support the UK’s current kerbside recycling schemes. It can be run in a single local authority, to target a select demographic group (e.g. by ACORN or Mosaic classification) or across a waste partnership area. The programme educates householders about metal packaging recycling and aims to motivate them to recycle more at home.

The programme is funded by a partnership of metal packaging manufacturers, fillers and reprocessors and is delivered on their behalf by the Aluminium Packaging Recycling Organisation (Alupro), with local authorities and their waste collection partners.