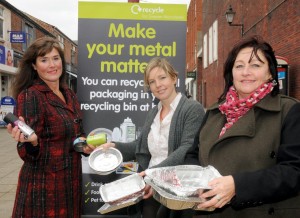 Industry-funded recycling programme MetalMatters has teamed up with Recycle For Greater Manchester (R4GM) for its latest campaign to improve capture rates for metal packaging. Over 405,000 households in the Greater Manchester area are being directly targeted in the 12 week campaign, which aims to increase capture rates for metal packaging collected at the kerbside.

A first for this campaign is the segmentation of council districts within a major conurbation: The direct communication element of the programme, based on a two phase leaflet drop to every household and local roadshows, is focusing on four local authorities, Rochdale, Stockport, Manchester and Trafford. Whilst other elements of the campaign, including radio and press advertising, will extend across all nine districts in the Recycle for Greater Manchester area (1.1 million households). Another new element in this campaign will see 15,250 households in the four districts targeted by a door-knocking campaign.

The 12 week campaign has been developed by MetalMatters and Recycle for Greater Manchester (R4GM) and is funded by R4GM (Viridor Laing), MetalMatters and the Waste & Resources Action Programme (WRAP).

Rick Hindley, Executive Director of  MetalMatters project managers, Alupro, said: “We are excited by the new approach that the Greater Manchester campaign is taking and we hope to learn a great deal about the impact and effectiveness of the MetalMatters messages across a major conurbation and, at the same time, in very specific areas, including those with a high percentage of multi-occupancy accommodation. This will be valuable as we aim to develop and refine the campaign to help more local authorities and waste partnerships realise the value of metals in their waste streams.”

Councillor Elaine Sherrington, Chair of Greater Manchester Waste Disposal Authority Strategy & Behavioural Change said: “We’re calling on local residents to make their metals matter and help increase Greater Manchester’s recycling performance. We are committed to reducing the amount of waste sent to landfill and we hope the campaign will encourage our residents to recycle more.”

Claire Shrewsbury, WRAP’s Packaging Programme Area Manager commented: “WRAP is pleased to support the running of the MetalMatters campaign for Greater Manchester. With this campaign’s ability to reach over 400,000 householders, we appreciate the huge opportunity offered from this collaborative project. WRAP hopes the community will positively engage with the campaign and recycle more metal.”

R4GM aims to increase metal packaging recycling by at least 10% in the four District Councils over the next 12 months with a view to using the MetalMatters campaign again in subsequent years to target all households in Greater Manchester.