Drinks can recycling programme Every Can Counts is currently supporting this year’s Coca-Cola Christmas truck tour in a new recycling initiative developed in partnership with Coca-Cola Enterprises (CCE). 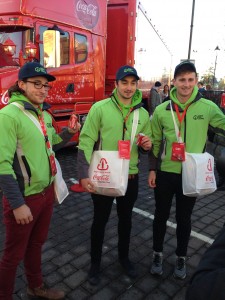 Volunteers from CCE and Every Can Counts will engage with members of the public about recycling whilst they are queuing to claim their free sample of Coca-Cola product available at the Christmas truck tour stops. They will be on hand to pose fun quiz questions along with handy recycling facts, and in return visitors will receive a free gift, including fridge magnets, or a recycling wheel which helps to clear up confusion around which materials can and can’t be recycled.

The recycling initiative will take place at eight stops on the Christmas truck tour across Great Britain, and will also involve a choir and photo experience alongside sampling of Coca-Cola, Diet Coke and Coke Zero.

Every Can Counts is a partnership between drink can manufacturers and the recycling industry which aims to encourage the public to recycle more, whether that be at work, at home, at an event or whilst out and about.

Giustina Diana, Recycling Manager, Coca-Cola Enterprises GB, said: “For many people the arrival of the Coca-Cola Christmas truck is a sure sign that Christmas is coming. Coca-Cola prides itself on spreading happiness during the festive period and we wanted to add a new element to the celebrations this year by engaging the public in the important matter of recycling.

“We hope that by discussing recycling with the public in a fun and memorable way, they will take away some useful tips on how they can recycle more at home and overcome some of the confusion which can sometimes surround recycling.”

Rick Hindley, Executive Director, Every Can Counts added: “The Coca-Cola Christmas truck tour is an event that attracts huge numbers of people and we’re pleased to be working with them to help spread the message of the importance of recycling drinks cans on-the-go.

“Drinks cans are endlessly recyclable. After they’ve been collected they can be recycled into new cans in just 60 days.  We are currently working with over 1,700 businesses and organisations across the UK to encourage out of the home drinks can recycling, and this partnership with Coca Cola Enterprises is one of our most high profile to date.”

The recycling initiative will be present at eight stops of the Christmas truck tour in December, including: