The Aluminium Packaging Recycling Organisation (Alupro) has added to its range of free resources to help local authorities encourage residents to recycle aluminium packaging over Christmas. 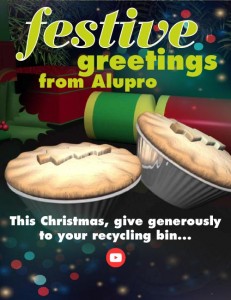 Alupro has produced a short animated video to promote the recycling during the festive season.  This adds to the range of advertising templates and digital communications that the organisation provides free on its online media library, and which local authorities are welcome to download, adapt and use as part of their festive communications campaigns.

The new video recently featured at the BBC Good Food Show Winter, where it was part of the ‘Supertheatre’ shows hosted by leading TV chefs, and was seen by over 24,000 people over the four day event.

“It’s surprising how many of our festive treats come packaged in aluminium. From oven ready turkeys in aluminium trays to party food, and of course there’s the 175 million mince pies we’ll be munching our way through! So Alupro is reminding everyone to put drinks cans, pie cases, kitchen foil and turkey trays in their recycling,” says Rick Hindley, Executive Director of Alupro. “Since aluminium can be endlessly recycled, it can be remade into a vast range of products, and back on our shelves within a few weeks.”

Not sure what’s made of aluminium or how to recycle?

Drinks cans – an extra 500 million drinks cans are sold in the UK at Christmas time! Recycling one can saves enough energy to keep the Christmas tree lights on for two hours.

Rick adds: “Our Christmas campaign supports the work we do with local authorities throughout the year to encourage residents to recycle their metal packaging.  This includes the ‘MetalMatters’ programme, which sees industry partnering with local authorities to promote recycling. MetalMatters has been delivered in over 50 council areas, reaching 3 million households (read the story here).