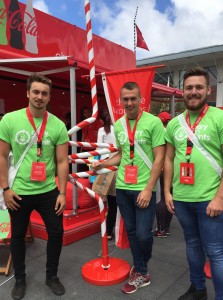 In a bid to boost recycling among consumers, Coca-Cola Enterprises Ltd (CCE) has announced that this summer’s Coca-Cola ‘Happiness Pod’ tour will be supported by an awareness initiative developed in partnership with Every Can Counts.

During July and August Coca-Cola is bringing its ‘Happiness Pod’ to towns and cities across the country. Built of four smile activated vending machines, consumers will be invited to stand in front of their Coca-Cola brand of choice which, with a smile, can be ‘unlocked’ to deliver them a perfectly served Coca-Cola sample.

Within a ‘Happiness Lounge’ where consumers can sit and relax, volunteers from CCE and Every Can Counts will engage with members of the public about recycling whilst they are queuing to interact with the ‘Happiness Pod’. They will be on hand to pose fun quiz questions along with handy recycling facts, and in return visitors will receive a free gift, including fridge magnets, transferable tattoos or a recycling wheel which helps to clear up confusion around which materials can and can’t be recycled at home.

The recycling initiative will take place at nine stops on the summer tour across Great Britain alongside sampling of Coca-Cola, Diet Coke, Coca-Cola Zero and Coca-Cola Life. The activation follows the success of a similar initiative which formed part of Coca-Cola’s iconic Christmas truck tour in December 2014 and resulted in over 75,000 cans recycled across nine locations.

Every Can Counts is a partnership between drink can manufacturers and the recycling industry which aims to encourage the public to recycle more, especially outside the home, at an event or whilst out and about. 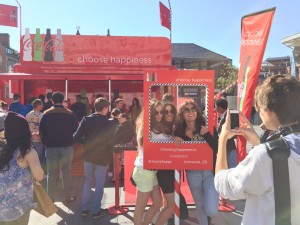 Giustina Diana, Recycling Manager, Coca-Cola Enterprises GB, says: “Coca-Cola prides itself on spreading happiness during the summer months and we wanted to add a new element to the celebrations by engaging the public in the important matter of recycling.

“We hope that by discussing recycling with the public in a fun and memorable way, they will take away some useful tips on how they can recycle more and overcome some of the confusion which can sometimes surround recycling.”

Rick Hindley, Executive Director, Every Can Counts adds: “With almost half of the drinks cans sold in the UK used by people when they’re away from home it’s really important to make sure they are encouraged to do the right thing with their empty cans. Being a part of the Happiness Tour is a great opportunity for Every Can Counts because it gives us the chance to talk to people about the value of recycling whilst they have a can in their hand, and as a result we hope they’ll remember to recycle wherever they are in future so we can keep the recycling loop going.”

The recycling initiative will be present at nine stops of the ‘Happiness Pod’ summer tour in July and August, including: