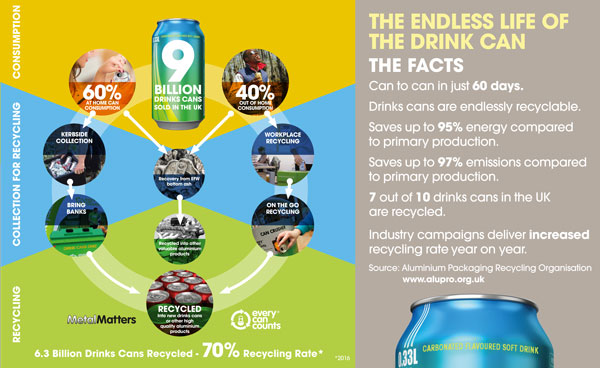 Seven out of ten aluminium drink cans sold in the UK in 2016 were recycled, according to the Aluminium Packaging Recycling Organisation.

Beverage cans make up by far the largest sector of the 180,000 tonnes of aluminium packaging placed on the market during the year; and with the UK being the largest beverage can market in Europe, and aluminium the dominant metal used for can manufacturing, the 70% milestone for aluminium cans makes a major contribution to the European metal packaging sector’s ambition to reach and exceed an average 80% metal packaging recycling rate by 20201.

Commenting on the recycling rate milestone Alupro Executive Director Rick Hindley said: “We are obviously very pleased that aluminium packaging recycling rates continue to increase year on year and it’s particularly nice to reach a new 70% ‘milestone’ for beverage cans. The continued growth is due to the support of our members and partners in the wider industry and their commitment to invest in and support our programmes to drive positive, lasting behaviour change among consumers.”’

Alupro has expressed concern that future recycling performance will be compromised by a lack of ambition from government in setting new targets for aluminium, and lobbied for targets to 2020 to be ‘front loaded’. The organisation has also argued for reform to the PRN system, including the mandatory registration of reprocessors and exporters to ensure that all material collected for recycling is reported through the issuing of Packaging Recovery Notes.  This was the result of research it carried out to reveal the ‘real recycling rate’ for aluminium packaging. The organisation expressed frustration when its argument for an increase in the 2017 target was ignored.

“We remain convinced that future growth in aluminium recycling performance is achievable within the current system, subject to a few revisions which will ensure all recycling is accurately reported and that behaviour change programmes are properly funded on a fair and equitable basis. Alupro believes that communication is the missing link between the collection infrastructure and recycling growth, as has been proved over and again by industry-funded programmes like MetalMatters and Every Can Counts. Our focus remains to make people aware of the aluminium in the packaging they use every day and how to recycle it so that the metal can be given a new life, over and over again.”

The recycling rate for aluminium can beverage cans is calculated by Alupro using data supplied by the national packaging waste database, and by its member companies, and using methodology consistent with that used across Europe to calculate recycling rates.

Every Can Counts encourages Women’s Cycling Tour fans to join the Recycle...
Scroll to top