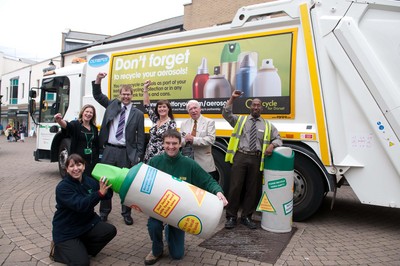 Alupro has revealed that more than 5.8 million households are benefiting from better recycling services as a direct result of the Aerofoil programme.

One of the major achievements of the Aerofoil programme has been to expand the kerbside collection infrastructure for aluminium foil trays, enabling it to qualify for the ‘Widely Recycled at Recycling Points’ labelling under the British Retail Consortium’s On-Pack Recycling Labelscheme. To qualify, 65% of local authorities must collect the material with kerbside or ‘bring’ systems (minimum five collection banks per local authority). The criteria will increase to 70% in 2012 and 75% in 2013 – targets which, thanks to Aerofoil, the sector is already well on the way to achieving.

Alupro executive director Rick Hindley, said: “We set out to help 80 local authorities add aerosols and foil to their services. In fact 98 new authorities have now changed their kerbside programme to include either, or both material as a result of this programme.  Our communications materials have been downloaded by over 140 different users.  We see it as a great success and an excellent example of how partners within the industry can facilitate extended producer responsibility, supporting the public sector to make a real difference.”

Aerofoil also proved that promotion of new services is vital. By establishing successful waste partnerships with 98 local authorities across the country, funding press launches and road shows, Aerofoil helped to increase aluminium aerosol recycling rates by as much as 100% in some areas.

Rick Hindley added: “It is vital that local authorities continue to communicate with households and promote their recycling services.  Regular, clear communication is essential to remind and reinforce awareness.  This will not only increase participation and capture rates, but will bring about long-term behaviour change.  This is an area that the metal packaging industry is already actively engaged in, and will continue to focus on in future activities.”